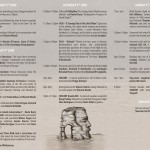 The first edition of INISH: Island Conversations was held at the end of May 2015 on the picturesque and often wild island of Inishbofin. The notion of creating a very different type of festival had been hanging in the air for some time and, in a steady but organic way, it made the transition from abstraction to reality.

Richard Murphy’s great poem Sailing to an Island resounds with us. Murphy found Inishbofin by chance when inclement weather forced a sailing boat bound for the “myths and legends” of Clare Island to land here instead. For Murphy, those serendipitous circumstances had a profound effect on his life and poetry. They also changed the island forever. In the years that followed, Murphy brought visitors to Inishbofin aboard his boat Ave Maria. Through him, Theodore Roethke, Sylvia Plath, Ted Hughes, Cecil Day-Lewis and many others found their way to the island to unwind, to write, to meet others, away from the bustle of big towns and noisy cities.

On this festival weekend, we want you to do the same. Relax, enjoy and participate. We will explore many different ‘islands’ – actual, geographical, political, philosophical, metaphorical or otherwise – and we will talk, laugh, and be highly entertained.