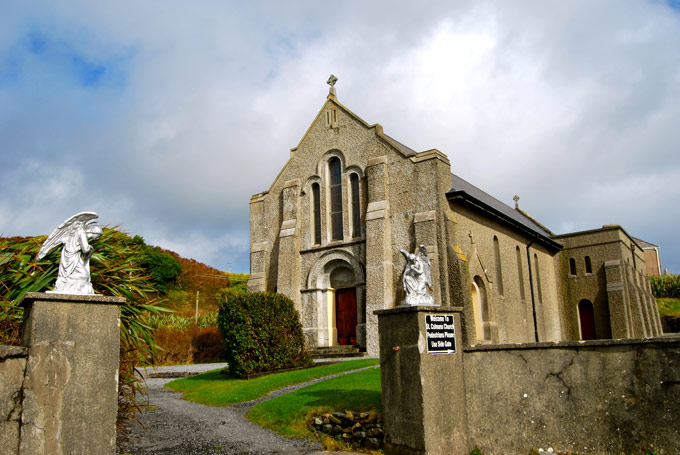 The present Church is the fourth house of worship since the arrival of St Colman in 664 A.D. It is situated on the same site as the previous building and work began on it on September 8th, 1910. The clerk of works was a Michael Gillooly from Co. Roscommon who was in charge of overseeing the completion of the project.

A total of 23 local men worked there at most times for a wage packet of 9s.-12s. per week. The total cost of this Church was between £1200-£1400 and it was completed in 1914. Fr Rhattigan from Miltown was the priest responsible for its initiation with Mr Cyril Allies co-operating in a munificent manner. Inside the church, one can observe windows inscribed to the memories of Richard Mathes (Kinsley) and Edward Moll (Olathe) both in Kansas who were drowned off the Stags on the north-west side of Bofin on February 3rd, 1976.

Rory O’More was a nephew of Sarsfield and a chieftain in Co. Leix. A tablet presented by a lady of that county, once on view in the Church read: “In memory of many valiant Irishmen who were exiled to this Holy Island and in particular Rory O’More a brave chieftain of Leix, who after fighting for Faith and Fatherland, disguised as a fisherman escaped from his island to a place of safety. He died shortly afterwards, a martyr to his Religion and his County, about 1653. He was esteemed and loved by his countrymen, who celebrated his many deeds of valour and kindness in their songs and reverenced his memory, so that is was common expression among them; “God and Our Lady be our help and Rory O’More”.