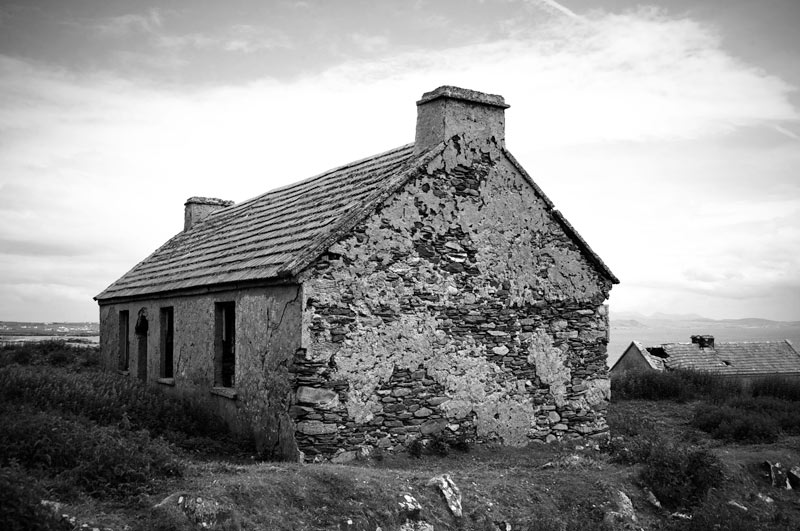 The sun shone beautifully. The breeze came softly from the east and the Atlantic only rippled instead of roaring. It was a perfect day for the death of an island.

Shark Island -Inishark in the Gaelic- lies seven miles off the Connemara coast of Ireland. A pretty sight. Since men first began to toil, hardy folk have tortured a living out of Shark’s thousand acres of rocky pasture and the sea around it.

The farming and fishing community used to be counted in hundreds. I have just watched the last twenty-three survivors -members of six families- moving out of Shark like a garrison surrendering after a life time’s siege. The Atlantic beat them. It hammered them into submission…cutting them off from the outside world for weeks, sometimes months, on end. Too often and too easily their tiny landing bay was whipped into a perilous cauldron by even the weakest winds. And over the years, as family after family emigrated, the survival problem of those who stayed grew more desperate.

Two years ago a Shark man died from appendicitis because no word of his plight could be got out for five days. That death sealed Shark’s fate. The Islanders asked the Government: “for pity’s sake, take us off here for ever”. So, on this rare, fine morning, four fishing smacks left the neighbouring island of Bofin on the last mercy mission to Shark. The fleet -St.John, St.Winifred, Topaz and Lilly- was commanded by young Father Flannery, the island’s priest, acting as agent for the Government. Off came Father Flannery’s dog collar and jacket as we stepped on to Shark’s landing stage. “Right, lads, let’s get moving!” he said. Soon men, women and children were staggering along the stony 500 yards between their cottages and the landing stage with their burdens, back-breaking, bizarre, and one, at least, bonny… A huge, home-made wardrobe lashed to the shoulders of fifty-three-years-old Michael Cloonan. A dark brown cat in an old blackened cooking pot, with the lid half tied down… Eleven-months-old baby Anne Lacey in the arms of her mother… Anne Murray’s geraniums, hens in baskets, geese in sacks, straw brooms and string-tied suitcases, iron bed-steads and  baths… Thirteen cows, twelve dogs, ten donkeys. eight more cats, scores of hens, a hundred sheep, a stack of hay -and a tear in the eye of Thomas Lacey, the elder. They all came down to the water’s edge of Shark for the last time. “Why should I not be happy to be going?” said Thomas, 73, grandfather of baby Anne Lacey and “father” of the island.

“I’ll not be grieving for it. I’ve wanted to leave for years. This island has had its share of my life. I was born here. I built this house with my own hands”. His voice trembled and his eyes glistened. “It gave me only poverty and it took two of my sons,” he said. “Look yonder at that strip of cheating water between the islands. I’ve seen it every time I came to this front door. That is where my sons drowned eleven years ago…” No regretful farewell, then, from the old one: his tear came out of the past. And the younger ones? Ten-years-old Philomena Murray lingered to the last in the schoolroom she shared with four other island children before teacher Rose McGarry went sick to the mainland a month ago. But her search on the big map of Ireland over the fireplace was for the spot in Connemara where her new home would be… “This is a happy day for us,” she said simply. Her brother George, 20, knew why -in detail. He told me: “During last November and December there were only six days when it was possible to leave or land on Shark. We were without tea, sugar and paraffin for six weeks. Nights are long when you have only the light of the peat fire to see by. Christmas came and went like that.” I sailed in the Noah’s Ark armada with old Thomas Lacey’s third son, Thomas Joseph, and his wife and baby. We sat on a wardrobe and watched the twelve inhabitable but untenable houses of Shark fade out of life. “That island is finished”, said Thomas Joseph, turning his back on it and pulling noisily on his pipe. His baby whimpered. At Cleggan, on the mainland, I watched him accept the key to the new life which the Irish Government has provided for each of the six Shark families.

There was a brand new bungalow by the sea, eight acres of land, a share in the grazing rights on a mountain and a shave of a bog for digging peat. It was cheaper for the Government to do this than to sink many thousands of pounds into a new harbour for Shark. Thomas Joseph looked so pleased it seemed that the sea, even in victory, had somehow been cheated. BUT SHARK IS, OF COURSE, DEAD.