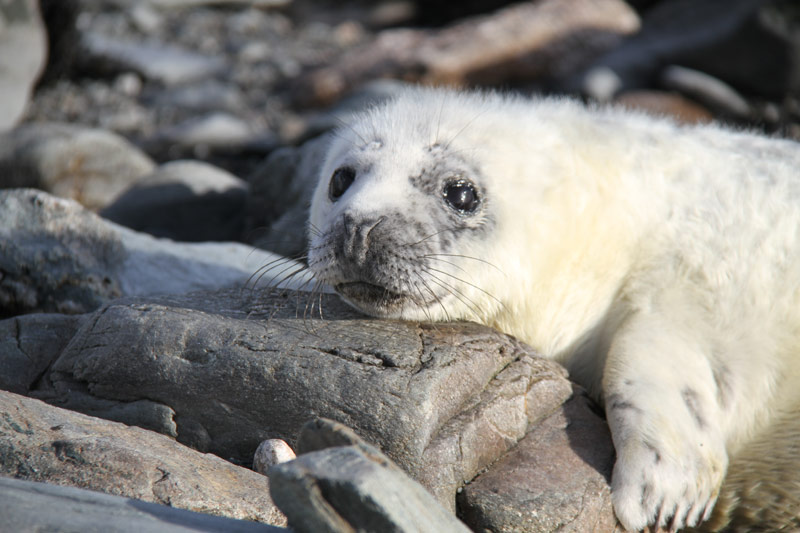 This site is situated off the Co. Galway coast about 5.5 km from the mainland.  It
comprises two main islands, Inishbofin and Inishshark, with several islets and stacks.
Part of the surrounding marine waters are also included.  The islands are composed
almost entirely of Silurian slates and shales and rise to heights of 89 m (Inishbofin)
and 69 m (Inishshark).

Inishbofin is the only inhabited island, with a population of about 300 people.  Two-
thirds of the island is commonage where the main habitat type is heath, represented by
both dry and wet heath communities.  There are many areas of relatively intact dry
heath present on Inishbofin, particularly around the middle and eastern quarter of the
island.  In most places this heath is associated with higher ground and  exposed rock
outcrops.  Some areas of bog and marsh occur, and plantain (Plantago spp.) swards
exist on the clifftops.  Several small oligotrophic lakes are present.  The largest
waterbody, Lough Bofin  has a brackish character and is classified as a  lagoon. A
small area of sand dune occurs at the eastern side of the island.  The remainder of the
island is under cultivation, with most of the area under grass for pasture and to a lesser
degree hay, a small proportion remains where potatoes, and grain-crops are planted.

Lough Gowlanagower is one of a number of small oligotrophic lakes present on
Inishbofin.  The north-eastern side of the lake supports good communities of Pipewort
(Eriocaulon aquaticum) and Water Lobelia (Lobelia dortmanna).

Lough Bofin is an excellent example of an isolated sedimentary lagoon with a cobble
barrier.  This type of lagoon is relatively rare in Ireland.  The lagoon is shallow (c. 2
m) and salinity varies considerably (oligo-euhaline).  Seawater enters by percolation
and by overtopping the cobble barrier and large volumes of fresh water enter at times
of high rainfall.  The lagoon is in an almost completely natural condition, of which
there are very few examples in Europe.  Floristically, the lagoon is very interesting; it
supports the rare charophyte Foxtail Stonewort (Lamprothamnion papulosum), a
lagoonal specialist which is listed in the Red Data Book and protected under the Flora
(Protection) Order, 1999, as well as two species of Tassleweed (Ruppia maritima and
R. cirrhosa) and Chaetomorpha linum, all of which are lagoonal specialists.  The
vegetation is an excellent example of a Ruppia/ Lamprothamnion community and the
plankton appears to contain unusual brackish species of the genus Prorcentrum.  The
fauna of the lagoon is species-poor, with only one lagoonal specialist, Jaera
nordmanni, recorded.  The absence of other lagoonal specialists may be due to the
relative isolation of the site.

Inishshark is located to the south-west of Inishbofin and was inhabited up until the
1960s.  The main habitats here are heath and rough pasture.  The island is bleak and
without trees.  There is a well-developed Plantago sward on the western side, where
there are also some high cliffs.  The other sizeable islands in the group are Inishgort,
to the south-east of Inishshark, and Davillaun, to the east of Inishbofin.

In addition to Foxtail Stonewort there are records from Inishbofin for several other
nationally rare Red Data Book species – Spotted Rockrose, for which there are recent
records, Wood Small-reed (Calamagrostis epigejos), last seen in 1967, and Marsh
Clubmoss (Lycopodiella inundata), last recorded in 1911.  The last two-named
species are also protected under the Flora (Protection) Order, 1999.  Darnel (Lolium
temulentum), also a Red Data Book species, was recorded from Inishshark in 1875.
Three lichen species known in Ireland only from west Galway occur on Inishbofin –
Catapyrenium cinerum, Opegrapha paraxanthoides and Lecidella umboella var.
alumula.

The site supports a breeding colony of Grey Seal, a species that is listed on Annex II
of the E.U. Habitats Directive.  In 1980, the colony which breeds on Inishgort was
estimated at between 140-180 animals strong.

The site is an important ornithological site. It supports breeding Manx Shearwater
(200-300 pairs) and wintering Barnacle Goose (up to 640 individuals), the latter a
species that is listed on Annex I of the E.U. Birds Directive.  Nationally important
numbers of Fulmar (824 pairs) and small numbers of the Annex I species Storm Petrel
(> 30 pairs) also breed.  A pair of Peregrine has nested for many years, while small
numbers of Chough breed and forage on the main islands.  Corncrake was once
abundant on the islands but declined in the 1960s until the early 1990s when none was
recorded.  More recently, however, the species has been recorded from the site – 1996,
1997 (two singing males) and 2003.  In 1995 27 pairs of Arctic Tern, an Annex I
species, were recorded.  Other breeding birds recorded from the site include Shag and
Black Guillemot.

In recent times, overgrazing by sheep, and to a lesser extent rabbits, has caused
damage to the vegetation cover of the islands.  Cutting of the shallow peat is also
considered a problem.

The site is of considerable conservation significance for the presence of an excellent
example of a lagoon, a habitat listed with priority status on Annex I of the E.U.
Habitats Directive, and for the good examples of heath, sea cliff, hay meadow and
other vegetation communities typical of exposed western islands that it supports.  The
presence of a breeding colony of Grey Seal, a species that is listed on Annex II of the
E.U. Habitats Directive, as well as populations of rare Red Data Book plant species
and of important bird populations adds significantly to the importance of the site.